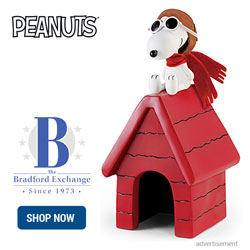 For a beginning collector, it can be very tempting to pick up everything Peanuts you see to grow your collection. My advice – resist the temptation! There are a lot of common collectibles you should wait to pick up at a cheap price. Today’s example: Camp Snoopy Glasses.

Back in 1983, the Camp Snoopy theme park was just about to open its doors. To commemorate this event, McDonald’s released a set of promotional drinking glasses in their restaurants featuring the Peanuts Gang camping. Customers would receive a glass with the purchase of a drink. One glass was brought out each week over five weeks. Two kinds were released, glass and plastic versions with the same designs. The designs included Charlie Brown “Hard Work”, Linus “Struggle for Security”, Snoopy “Morning People”, Lucy “Properly Prepared” and Snoopy “Civilization.” View the original commercial…

The glass versions are very, very, VERY common. Only buy the glass versions around $5 or less per glass and in absolute mint condition, no fading, cracking, scratching or dishwasher etching. The plastic cup versions are much harder to find. In collectible condition, expect to pay between $5-10. The cups are prone to a lot more wear and can be difficult to find in pristine condition. View the cups & glasses…

The McDonald’s Camp Snoopy memorabilia doesn’t stop there! McDonald’s also had other items, such as tray liners and in-store displays, that have collectible value. The glasses might be easy to find, but the supporting advertising isn’t! The most elusive item is the sixth Camp Snoopy glass. The glass was never released to the public because it was meant to be a teaser to the upcoming glasses and encourage store owners and managers to purchase the glasses. Because of its rarity, it has sold for over $100 on auction websites. If you’re lucky enough to find one, you might want to pick it up!
View our collection of Peanuts McDonald’s memorabilia…

For more about collecting promotional glasses, check out the Promotional Glass Collectors Association at pgcaglassclub.com. They have a great database including a lot of Peanuts glasses I’ve never seen.

McDonald’s had 7,778 restaurants in 34 countries by the end of 1983 compared to over 33,000 in 119 countries today. One of my favorite treats, Chicken McNuggets, first debuted on the menu in 1983. Also, the Hamburger University opened in Oak Brook, Illinois. Now, who’s hungry?